In 2014, Mumbai Mills, along with Rishita Chandra of Sweet Notes, conceptualised the very first Mumbai Diary, an annual agenda bequeathed to the mega city of Mumbai.

2015
Mumbai Diary 2015 is a celebration of the signage on the streets of the mega city. The photos are a tribute to the quirky, vague, and yet, somehow, functional ethos of Mumbai.

2016
Mumbai Diary 2016 was sold out before the end of the first quarter of the new year! The agenda this year catalogues the different residential buildings in the city, giving us a glimpse into the lives of the people who make it their home.

Mumbai Diary retails at Nalanda at The Taj, The Prince of Wales Museum Shop, Rhythm House (sadly, not anymore), Pantry, Filter and Indigo Deli. Visit us on Facebook or email us at mumbaidiary2014@gmail.com | info@mumbaimills.com

We are happy to personalise our agendas for you.

Of the many stories a city tells, a prominent one is of the evolution of the way its people reside. Homes are a reflection of a city’s development; through stick, stone, mortar, brick and cement they tell us about the past and present of a city.

Dwellings in Mumbai might have originally been simple huts of the koli folk, but that changed in the 15th century when the Portuguese built formal residences. The Manor House was home of Garcia de Orta, to whom the 7 islands of Bombay were originally leased. Garcia’s manor later became the site of the Bombay Castle around which the busy Fort area of the city grew. In the 18th century, Native Town, around Kalbadevi and Nul Bazaar, developed as a dense residential area for the ‘native’ people of Bombay. In the past 200 years the city has grown and its residents now number over twenty million.

Today, Mumbai is made up of massive skyscrapers and humble chawls; restored art deco buildings and decaying indo-sarasenic mansions; flimsy slums and concrete bastis housing lakhs of people; extravagant sky villas and sea-faring fishermen’s houseboats. The styles of these homes are a motley combination of diverse architecture - Victorian, Art Deco, Rural, Organic, Vernacular and Basic… this mega city accommodates all.

Cataloging the different residential buildings in the city was a glimpse into the lives of the people who make it their home. So whether these homes seem frugal or flamboyant, decaying or distinguished, they all tell stories of millions of Mumbaikars… stories which come in many more than just 50 shades of grey. 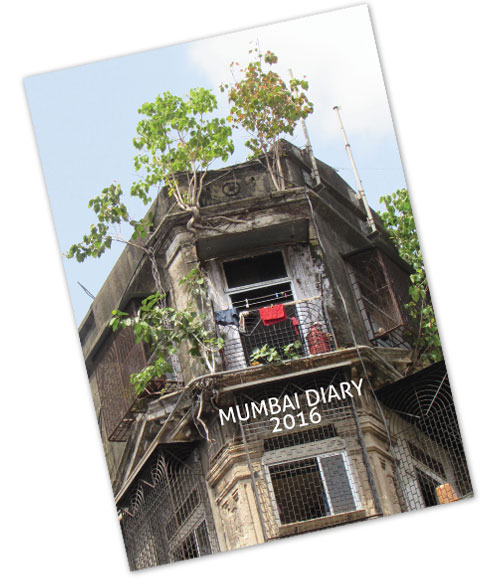 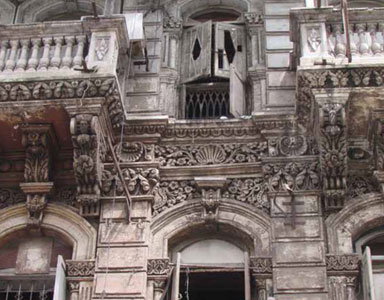 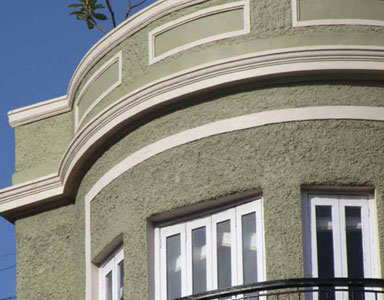 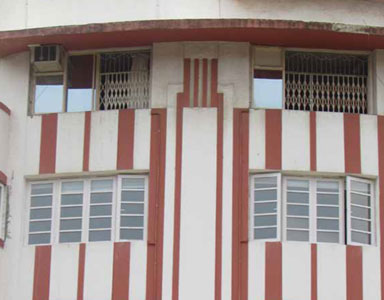 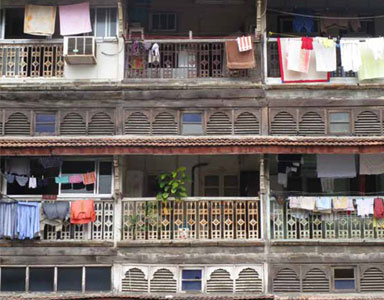 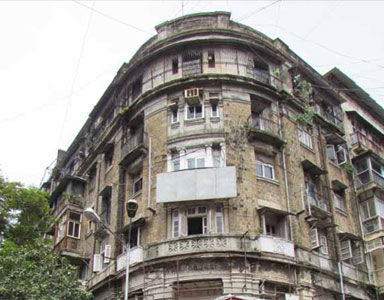 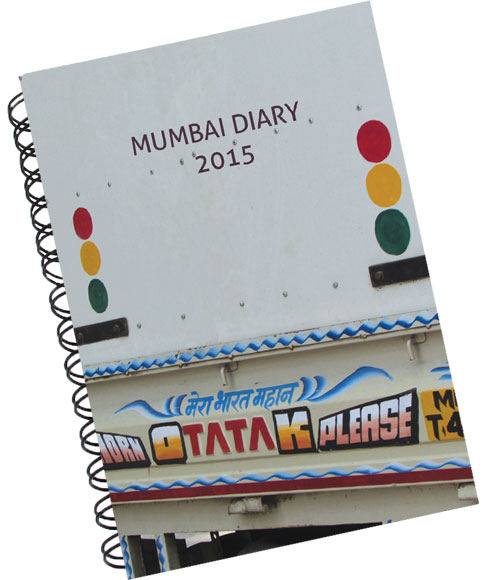 Mumbai has the power of constantly stimulating, and sometimes, violating our senses. We are bombarded by a barrage of olfactory, audio, visual, gustatorial and tactile stimulations.

The streets of our city are especially spilling over with visual treats, in the form of advertisements, suggestions, threats, opinions, regulations, and entertainment. As you walk around, try counting the number of signs you see on the street - do include gaudy billboards; kitsch messages on taxis, buses, rickshaws, bicycles and tree trunks; the political and religious symbols; the messages etched on the street, as well as official and unofficial street signs rusted beyond recognition. Some signs are so unusual you can’t help but stop and stare: ‘Birds Singing’, ‘Accommodation Marg’ or ‘Don’t be a Maybe’. They are everywhere, in black, white and multi-colour; you needn’t look too far in a city like ours.

This New Year, take a little time to stop to smell the roses... or simply see the signs. 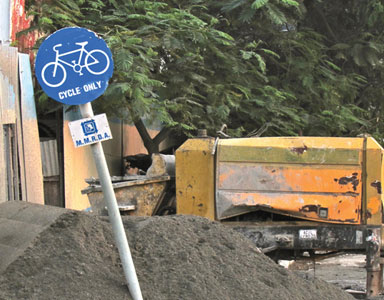 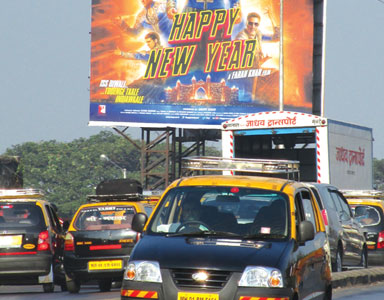 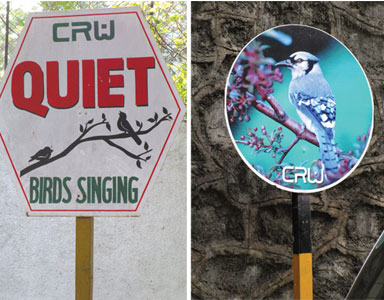 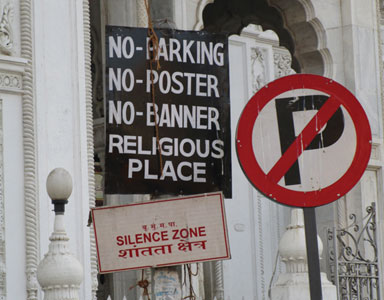 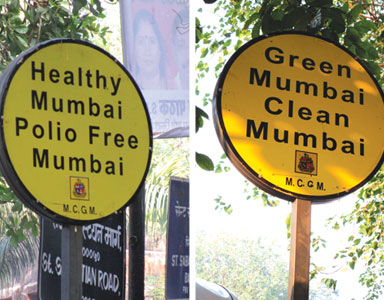 When there are so many angles to a city it is hard to summarise it. Sometimes a camera lens helps because you stop to observe, more thoughtfully, the things you see every day – the barber on the pavement, the cobbler around the corner, the dog walker on the phone, or the ear cleaner down the lane. Mumbai, amongst several other idiosyncrasies, features a pageant of trades that are conducted on the streets we use daily. Some of these are perhaps to be found nowhere else in the world.

Mumbai Diary 2014 catalogues candid images of these small businesses, that sometimes go unnoticed, which, in the fast paced world of change, may soon come to be obsolete. Shot from a car, during a walk, or from our balcony, these photos represent some lifelines of the city that connect the lives of the most affluent residents to city dwellers from far more humble origins. This connection, we believe, makes our city of dichotomy work. Happy New Year!

We are currently working on Mumbai Diary 2016 and we hope to launch an Amsterdam Diary in the near future! 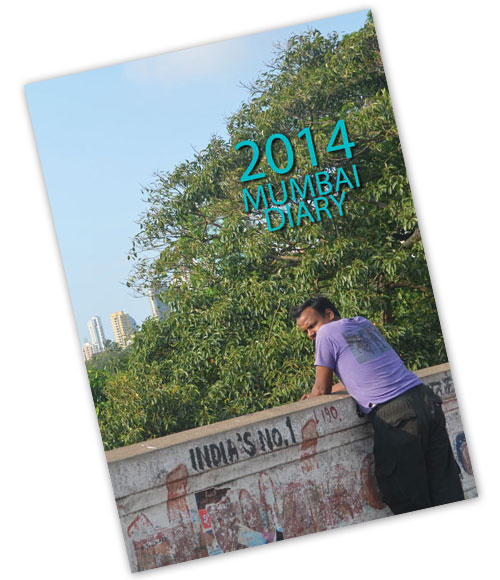 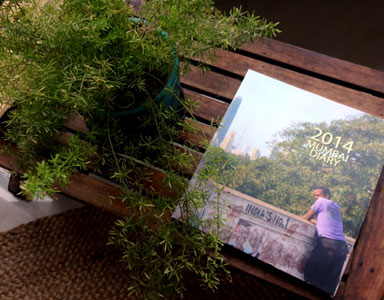 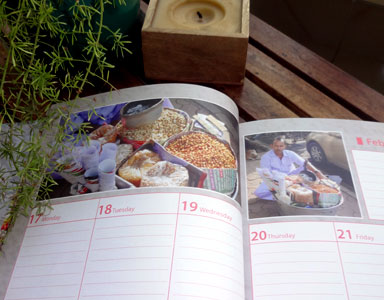 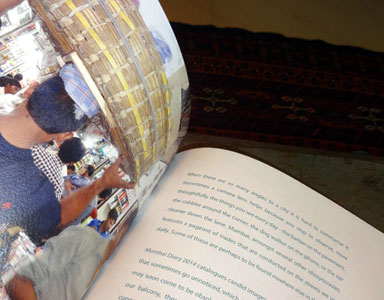 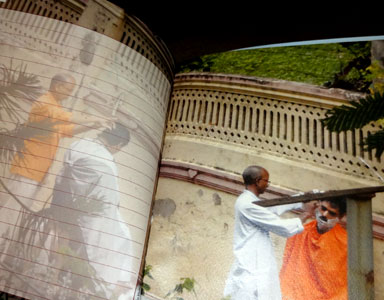 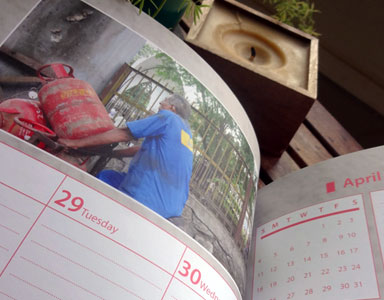